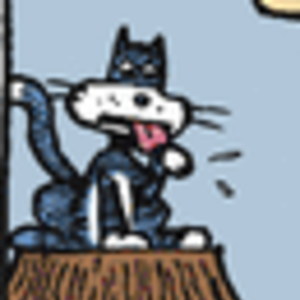 Pickles is a female cat owned by Francis. Her and Spitsy, a dog living in the same neighborhood owned by Donald Eustis, are engaged, despite the fact that they are different animals. Pickles is an outdoor cat, and she likes to lie down on random driveways. She is in love with Spitsy.

It is unknown when Francis bought Pickles, but she quickly developed a habit of marking her territory. She also fell in love with Spitsy, though when and how they came together is unclear. Once, Nate got a black eye trying to stop Spitsy from reaching Pickles while they were on a walk together.

She is a very intelligent cat, once demonstrating just that by her EMT training. She can mountain bike and juggle on a unicycle while whistling. She can also play chess. Once Francis brought her to his basketball game so she could be their mascot, even giving her a miniature jersey and tiny pom poms, which Nate didn't like, leading to him deliberately throwing a basketball at her in the comic strips.

Pickles is shown to be an outdoor cat, always laying on the ground as if she owns the world., as quoted by Nate Wright.

Pickles is an example on a list on why Spitsy is not a normal dog. Pickles and Spitsy seem to enjoy spending time together, including playdates and Pickles' birthday.

Francis is Pickles' owner. Francis loves her, and has taught her lots of tricks.

Essentially, Spitsy is Pickles' soulmate. They are engaged.

Pickles does not seem to care about Nate. On the other hand, and partially due to Nate's fear of cats, Nate deeply hates Pickles, also describing her as obnoxious.

Once, he got a black eye trying to stop Spitsy from reaching her while they were on a walk together.

Retrieved from "https://bignate.fandom.com/wiki/Pickles?oldid=83352"
Community content is available under CC-BY-SA unless otherwise noted.