Randy Betancourt
Phil Gaffney is a substitute teacher at P.S. 38. He taught Mrs. Godfrey's class while Clara Godfrey was out on sabbatical.

Not much is known about Mr. Gaffney except that he was a long-term substitute teacher for Clara Godfrey when she went on sabbatical.

After Nate Wright and Teddy Ortiz entered the classroom, Mr. Gaffney reveals himself to be a long-term substitute for Mrs. Godfrey, who is going on sabbatical. Eventually, Nate gives him a nickname, Al G (Amish-Looking Guy). He started liking it. 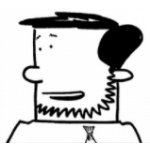 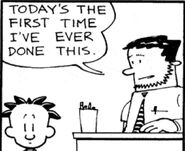 When Mr. Gaffney was first seen

Phil Gaffney seems to be friends with Ms. Clarke because she asked him how his first day was. It is unknown if they are in a relationship.

Phil Gaffney and Martin are neighbors.