Peter Mason is a student that attends P.S. 38. He is in Mrs. Bigbee's first-grade class and is mainly known as Nate's "book buddy" in school. He is the only person Nate has babysat. He is as intelligent as a college-professor and reads above-college leveled books like Flaubert, War and Peace, and Sense and Sensibility.

Nate had the idea of a summer camp in 2006. Peter's mom signed him up for it, but only because his mother missed the deadline for robotics camp. This started to make Peter furious at Nate and his mom. The two did a nature walk, which had no nature except Spitsy. Then, the scavenger hunt was to force Peter into buying Nate food. He finally got Peter occupied with a New York Times Crossword Puzzle, but he solved it instantly. They had a "campfire" at 10:30 AM which was just an imaginary fire. They played water sports, but it was only Marco Polo in an inflatable pool. It's also revealed later that they played "Duck Duck Goose" together. Peter was the first and only member of the summer camp. This ultimately leads to Peter being angry at being Nate's book buddy. Nate was later hired by Peter's mother to bring him to trick or treating and to the beach later.

At the beach, Peter ran out of sunscreen. Nate gave him his own sunscreen, but it contained cocoa butter, and it was revealed that Peter is allergic to cocoa butter so they had to go to the emergency room. Nate then came up with another game that involved Peter not telling his mom about that. Nate once hired Peter to help him study for his social study exams. Nate ended up getting 99%, because he got every question right, yet he forgot to write his name in the space provided which lead him to lose one point. Nate babysat Peter a few times. Peter's mom told Nate to make Peter get some exercise while he was babysitting, which include playing catch and frisbee but Peter noticed that Nate's glove that he borrowed had a different name on it.

Peter has also been a wacky plot twist during the fact town smackdown of 2014 (Francis VS Gina). Francis got a question wrong, then suddenly Peter appeared. Gina proceeded to answer the next question but he answered that question so Gina could not result in a tie. Gina was really surprised.

Peter has brown hair and wears small round glasses. Over the years, Peter had grown quite a bit fatter than before. Peter has a lisp, and cannot say his "S"s properly - instead, the S is replaced with an "Sh" sound...

Nate is usually pretty friendly to him, not really noticing that Peter would rather that he not be around. Peter sometimes screams when he hears Nate yell, “Peter, m' lad!”

All that is known is that a girl in his class is in love with him. Peter seems uncomfortable with her affection, freaking out when she spots him and trying not to make eye contact with her in class. However, this leads Nate to believe that he feels the same way back to her, and calls him, "YOU DOG!!" 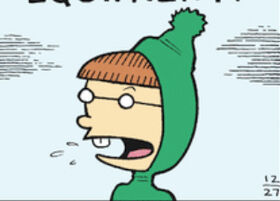 Peter at the beach 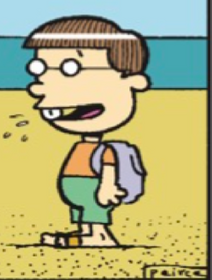