P.S. 38, or Public School #38, is the school where most of the Big Nate comic strips take place. Nate is a sixth grade student at the school. Nate does not like the school, as it is beaten up and old. The school is over 100 years old, and is two or three floors high. The mascot of P.S. 38 is the Bobcat.It's Rival Is Jefferson Middle School

P.S. 38 opened on February 7, 1912, making it over a century old. Over the years, the school has gotten old, and beaten up. Paint started to peel, and problems occurred more frequently. When a mural by folk artist Granny Peppers was discovered in the school, P.S. 38 sold it to a museum. The money they received was used for repairs on the school. The history of the school is revealed in the novel, Big Nate: Lives It Up. 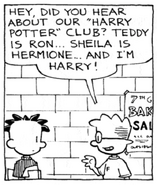 Nate and Francis conversing at school. 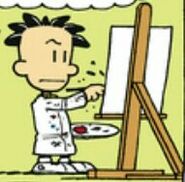 Nate in Art class
Add a photo to this gallery
Retrieved from "https://bignate.fandom.com/wiki/P.S._38?oldid=96511"
Community content is available under CC-BY-SA unless otherwise noted.