Mr. Galvin is a Science Teacher at P.S. 38. He has worked at the school for over 40 years now. He has a son who once worked as a substitute science teacher for his dad. He is 70 years old, according to Teddy Ortiz. He is a very minor character in Big Nate. He has also said to Nate Wright, that it is almost impossible to clone someone. Nate Wright once challenged Gina Hemphill-Toms if she could make Mr. Galvin laugh and succeeded, she is the only known one that has been able to do so. His son, Mr. Galvin says that he's always laughing and joking around, though.

Mr. Galvin is an old man with almost no hair. He has a red-ish nose and wears glasses. He appears to be pretty tall. He wears a white buttoned shirt, and a polka dotted tie. He also wears plaid pants. Though he does were different outfits sometimes. Like the gym clothes.

Mr. Galvin is believed to be short-tempered, and Nate Wright seems to anger him daily, as we see on Nate's Angergraph.

One time, Mr. Galvin took Nate's pen because it was "distracting". It then began to bleed on his shirt where Nate began to laugh at that. Nate earned a detention for 5 hours for doing that. 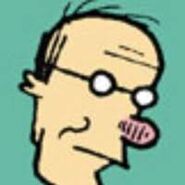