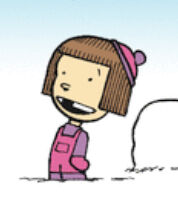 Miranda is a six-year-old girl in first grade who was once babysat by Ellen Wright. She also enjoys ragging on Nate Wright.

Nate once substituted Miranda's book buddy and on multiple occasions, he found Spitsy stealing Miranda's dolls because he wanted to.
She occasionally works with Peter.

Miranda is very aggressive and is never afraid to threaten a sixth-grader, as she watches a lot of martial arts and eats too much sugar. She has brown hair and eyes and is missing her two top front teeth.

Miranda also tends to raise her voice a lot, and she was featured in Nate's movie as an extra, wanting to hit someone.

Miranda threatens Spitsy
Her Name Is Mud.jpg
Comic of Miranda (3/1/2020)
Add a photo to this gallery
Retrieved from "https://bignate.fandom.com/wiki/Miranda?oldid=93557"
Community content is available under CC-BY-SA unless otherwise noted.