Marcus Goode is a very "popular" guy in P.S. 38 . He has a posse that Nate was once in. Before that, Nate had always tried to be as "popular" as Marcus. When Nate left the posse, Marcus beat him up, much to Teddy and Francis' entertainment. Marcus used to be envied, but now people seem to loathe him. He is called one of the biggest bullies as of now. He has been described by Nate as the trendsetter of P.S 38.

Marcus Goode created a posse in junior high school and succeeded by the time he embarked in the seventh grade. Student Nate Wright used to be a part of it, but he eventually defected, causing Goode to despise him.

At one point, Marcus began a trend with sneakers. Appalled, Nate made an attempt to replace Marcus as P.S. 38's trendsetter. However, Marcus discovered this, he crushed Nate's sombrero and beat Nate up for it. Teddy Ortiz and Francis Pope witnessed this and apparently found the letdown appealing.

The two also ran against each other for the rank of class president and Nate managed to win by one vote.

After that event, Marcus made fun of Nate for a variety of things, such as hitting himself with a water bottle to calm himself. Marcus was also present at the first official performance of Enslave the Mollusk, which did not work out well. Afterward, he taunted Nate and the other band members, saying that he expected some music, not comedy.

However, his posse also broke off from him for a time once Nate acquired the "Lucky Foot" from Chad Applewhite.

Shortly afterward, Marcus engaged in a brief relationship with Maya. Ultimately, she dumped him when Marcus poked fun at Chad, calling him "Superchunk" attributing his ample weight. (He was probably Maya's crush from the beginning.) Note: This was in the novel only.

Dee Dee Holloway angrily told him to stop, in which he smugly questioned how they will make him do that. Maya, who had accompanied Marcus, told Marcus to stop hurting Chad, and in the process, broke up with him. She ran away crying, leaving Marcus shocked and Chad confused.

Marcus then left with his posse, which had apparently returned after the Lucky Foot was lost to schoolteacher Ms. Godfrey because she assumed that the lucky charm was a toy.

Marcus is highly condescending, vain, narcissistic, and unkind, always taking pleasure in putting other students down. Despite his shortcomings, he has eyes for Maya and appears to have respect for his posse. Indeed, the posse seems to follow him out of admiration, not fear. Most likely because they want to be with one of the coolest kids in the school.

Marcus Goode is the primary antagonist of Big Nate: In The Zone, bullying 6th graders, especially Chad Applewhite. He was the first kid at P.S. 38 to ever post on YouTube. He is a trendsetter in P.S. 38. 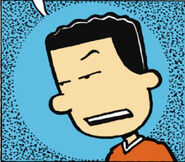 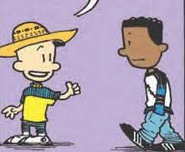 Add a photo to this gallery
Retrieved from "https://bignate.fandom.com/wiki/Marcus_Goode?oldid=83897"
Community content is available under CC-BY-SA unless otherwise noted.