Owners of the Cressly's Bakery

Kim Cressly is a minor character in the Big Nate series. She has a crush on Nate, but Nate does not feel the same way with her. Nate didn't like the fact that she was overweight, and Kim got mad. She forces Nate to be more than "project partners" with her during a project, and to draw her. In 2012, Kim gets over her crush on Nate and goes out with Chester Budrick instead. Also in the same year, Kim joined Nate's baseball team because the softball league had been disbanded.

Kim Cressly has a crush on Nate Wright, however Nate does not feel the same and is somewhat scared of her, because Chester Budrick got mad every single time he caught Kim, and Nate talking At one point, they were project partners, although Kim also wanted to cuddle. She also went with Nate to the school dance once. Eventually, she started going out with Chester Budrick instead. Shortly before Christmas, she received a card from a "Secret Santa", but she became angry because she received a box of lug nuts from Nate. Nate became worried because Kim lost her temper. Kim often does things that make Chester think that Nate is trying to flirt with her, resulting in him being beaten up.

Kim used to have a crush on Nate and believed that they were dating. 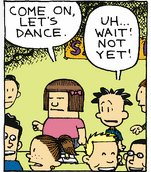 Kim and Nate at the school dance

Kim about to ask Nate to the school dance