Jeff is a male sixth grade student who attends P.S. 38. He was described to be unattractive by Nate Wright saying that if Jeff could find a girlfriend, so can he. Nate once got sick of turkey, so he asked Jeff to trade lunches with him. However, his Thanksgiving leftovers he had for school lunch were also displeasing to Nate which were vegetables, fruits, and tofu, as he asked Sheila Stapleton to remind him to never attend a holiday celebration at Jeff's house. 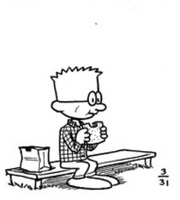 Once, Nate asked him if he wants to be the first member of his posse. Jeff got worried because he thought he had to be hazed to join the posse. He pleaded Nate not to haze him.

When Nate lost his lucky socks, Jeff returned them, but to Nate's shock, he washed them, which Nate thought washed the luck off because it refreshed them. Nate once told him to give a note to Angie, but instead he gave it to Andy.

At one point, he also played football with Nate and his friends.

Jeff appears not to be very bright and smart, as he thought he needed to be hazed to join a posse and he sent a message to Andy instead of Angie. He is also unattractive according to Nate.

Jeff decided if he wanted to be "popular", he wanted to go out with a popular girl. He decided to take Nate's advice and find a girlfriend. He first asked Lisa, and she said no. Then he asked Fiona, who said yes. Jeff really likes Fiona, but she doesn't really feel the same way about him.

Retrieved from "https://bignate.fandom.com/wiki/Jeff?oldid=91769"
Community content is available under CC-BY-SA unless otherwise noted.