Gina is a "know-it-all" student in the P.S. 38. As thought by Nate, she is terrible, although Gina and Nate views each other's work as terrible.

In recent strips, it has been hinted that Nate actually likes Gina deep down, but denies his feelings for her because he believes that he hates everything about her.

''In Big Nate On A Roll, Gina ruins Nate's plans of getting her and Artur together so he can have Jenny for himself. Nate's plan backfires and Artur misunderstood his plan so he tells everyone Nate has a huge crush on Gina. Gina tells Nate that she hates his guts and Nate punks her by telling her he doesn't hate her guts, it's her face that disgusts him.

In Big Nate Goes For Broke she is mentioned in the worst cartoonists comic.

Ironically, Nate's behavior toward Gina of despising her but hiding feelings for her is identical to what he thinks is his relationship with Jenny, in that he believes Jenny acts like she hates him but really likes him deep down. 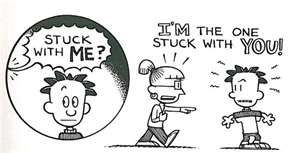 As seen in Poptropica
Add a photo to this gallery
Retrieved from "https://bignate.fandom.com/wiki/Gina_Hemphill-Toms?oldid=5476"
Community content is available under CC-BY-SA unless otherwise noted.