Big Nate On a Roll

Big Nate On a Roll is the third book in the Big Nate book series.

Nate finds out that if he wins the Scout Troop fundraiser, he can replace his skateboard. But this won't be easy, as new scout Artur is his competition.

Nate is sent to detention, which wasn't his fault but Artur. After he gets out of detention, Nate ends up losing his skateboard in a creek, (and his achievements (not verbally) for being late)and he finds out that Artur joined the troop. Nate then finds out the grand prize is a skateboard, an opportunity to replace the skateboard he lost in the creek. Nate however, has Artur wanting to win it as well, much to Nate's dismay. Nate's selling fails quite a bit after he gets hit when Spitsy runs into a tree, getting kicked out of the mall, hitting a lawn gnome, and getting grounded. He then tries to get Artur to go out with Gina so that he can get Jenny but fails, and Artur thinks that Nate wants Gina. Nate then sells a comic book, Bumblebee for a lot of money, and he catches up with Artur for a tie. After they have a coin flipping tie-breaker, Nate wins the skateboard and Artur gets the second-place prize, a telescope. However, Artur is not jealous (and not angry that he lost) and invites everyone to come and check out his new telescope. 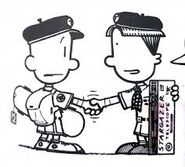