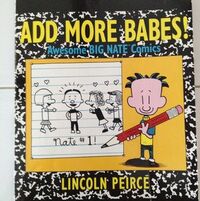 Big Nate: Add More Babes is the first "Big Nate" book ever released. It was released on January 7, 1992. It contains some of the oldest Big Nate strips from his online comics collection. Therefore, it is a collector's item. Many characters look way different, and the next book came out 5 years later, so they have different looks.

Retrieved from "https://bignate.fandom.com/wiki/Big_Nate:_Add_More_Babes?oldid=117160"
Community content is available under CC-BY-SA unless otherwise noted.